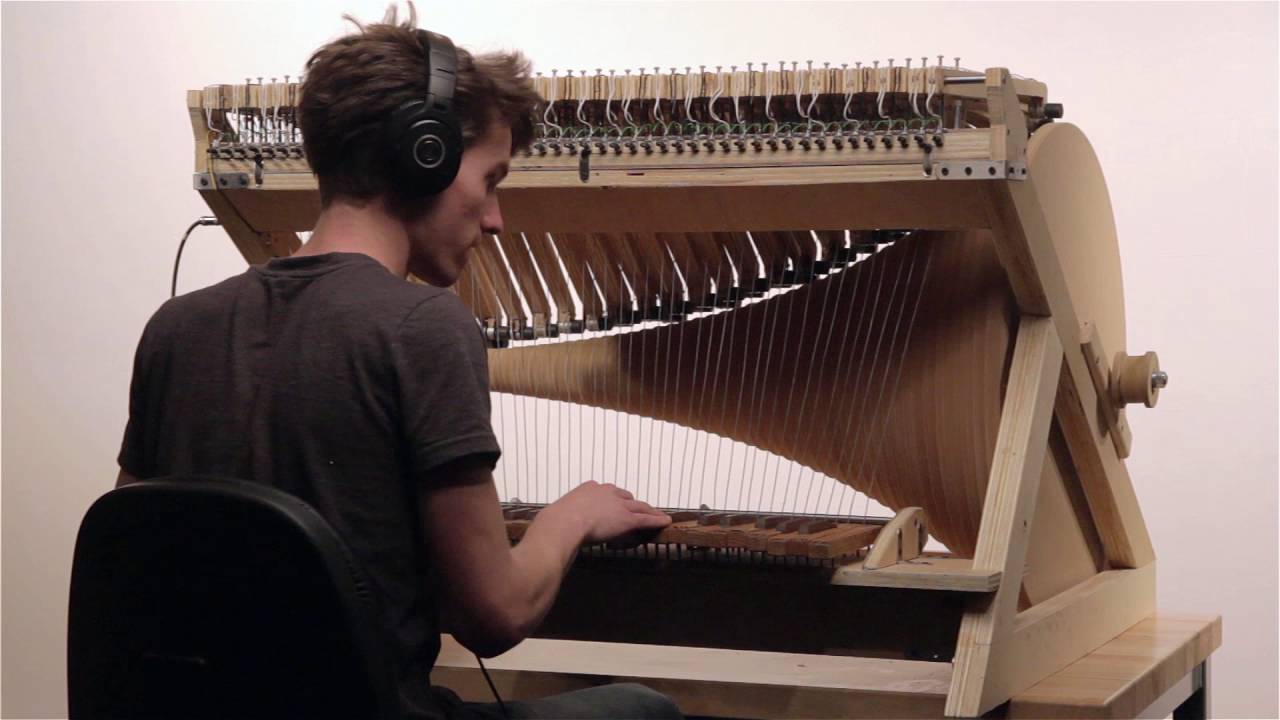 Next Video
This is an experimental instrument I built that uses back-driven stepper motors to synthesize sound. I know it sounds super ugly but it was fun to build and it proves the principle.

Read a lot more about this project here: http://dothings.weebly.com/things/stepper-organ

The operational principle is that when stepper motors are back-driven, they induce a pseudo-sinusoidal alternating current. If this signal is amplified and connected to a speaker, you can listen to it as sound. The pitch of the sound is determined by the frequency of the wave, which depends on how fast the motor is back-driven. Higher speed will be a higher note. I thought this sound was interesting, so I wanted to make an instrument that used this mechanism to make music.

There are 49 stepper motors, one for each note in my four octave instrument. At rest, each motor floats above one of 49 disks, which increase in size exponentially as the notes ascend in pitch. The disks spin together, driven by a single speed-controlled DC motor. When a key is pressed, the corresponding stepper motor is engaged with the corresponding disk in the disk stack, and the disk back-drives the stepper motor. The larger disks are moving faster on their outside edge than the smaller disks, so the stepper motors are driven faster by the larger disks than the smaller disks. The disks are sized such that all the notes will be in tune relative to each other. The key that the instrument plays in is determined by how fast the disk stack is spinning. A faster disk stack will play a higher key, a slower disk stack will play a lower key. The speed of the disk stack is a global pitch shift.

Each note has a volume knob because the higher notes come in much louder than the lower notes, so they need to be trimmed down.

The disk stack isn't built perfectly; it actually wobbles a little bit off axis. Because the pitch of any note isn't actually determined by the radius of the disks, but rather the instantaneous radius at the current point of contact, this causes most notes to slightly fluctuate in pitch as the disk stack rotates. This adds an interesting character to the sound.

Another interesting effect is that especially when spinning at higher speeds, it may be difficult to get the higher notes to fully engage with their disks. You have to push the higher keys pretty hard to get full engagement, otherwise the note may go up to a half or full step flat.

I was inspired to build this instrument after seeing Wintergatan's Marble Machine and build process videos. The Marble Machine video is here: https://www.youtube.com/watch?v=IvUU8joBb1Q