Where Are the Ants Carrying All Those Leaves? | Deep Look 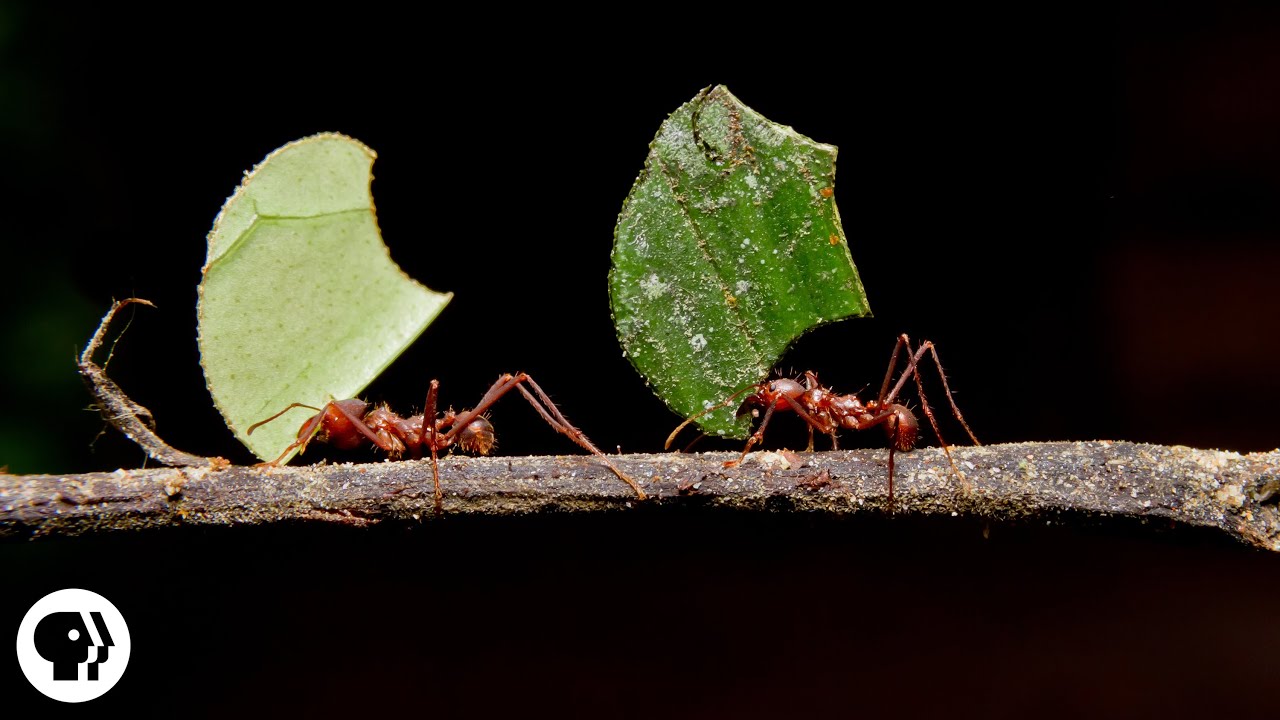 Next Video
Ants don’t eat leaves. They use them to grow white tufts of nutritious fungus to feed their offspring. Their success as farmers has made leafcutter ants into fungus tycoons, complete with their own underground cities and huge half-inch soldiers to patrol them.

DEEP LOOK: a new ultra-HD (4K) short video series created by KQED San Francisco and presented by PBS Digital Studios. See the unseen at the very edge of our visible world. Get a new perspective on our place in the universe and meet extraordinary new friends. Explore big scientific mysteries by going incredibly small.

What do ants eat?

Though leafcutter ants drink the sap in leaves for energy, they don’t eat them. Instead, they use them to grow something else. Leafcutters use leaf pieces to feed a fungus that grows in white tufts in their nests. The ants eat the fungus and feed it to their brood.

How old are ants?

To give you an idea, while humans have farmed for around 12,000 years, ants have been doing it for 60 million.

How many ants are there in the world?

If you bundled together all the ants in the world, there would be more of them than people – they’re the dominant biomass, says Brian Fisher, chair of the Department of Entomology at the California Academy of Sciences, in San Francisco. This is because all 30,000 species of ants are social. They have many ways of making a living.

How strong are ants?

Leafcutter ants haul leaf pieces through fields or forests to their underground nests. For a human, this feat would be the equivalent of carrying more than 600 pounds between our teeth.

Why are ants important to the soil?

The activity of ants aerates the soil, making it easier for water and oxygen to get through. They also contribute organic matter.

What Happens When You Put a Hummingbird in a Wind Tunnel?
https://www.youtube.com/watch?v=JyqY64ovjfY

See also another great video from the PBS Digital Studios!

It's Okay to Be Smart: What's The Most Successful Species on Earth?
https://www.youtube.com/watch?v=fWc46NCnldo

And this one is also a favorite:

How to get Ants to carry a sign - Smarter Every Day 92
https://www.youtube.com/watch?v=-ZZzcw9ifDQ

Read an extended article on how leafcutter ants grow a fungus from leaf pieces:

If you’re in the San Francisco Bay Area, you can see live leafcutters at the Oakland Zoo or the California Academy of Sciences, in San Francisco.

The compact book “The Leafcutter Ants: Civilization by Instinct,” by Bert Hölldobler and Edward O. Wilson, has detailed black and white drawings, photos and a fascinating description of the mating habits of leafcutter ant queens. The queen accumulates all the sperm she’ll need for her entire reproductive life during a single mating frenzy. After that, males are no longer necessary: Leafcutter colonies are made up entirely of female ants.