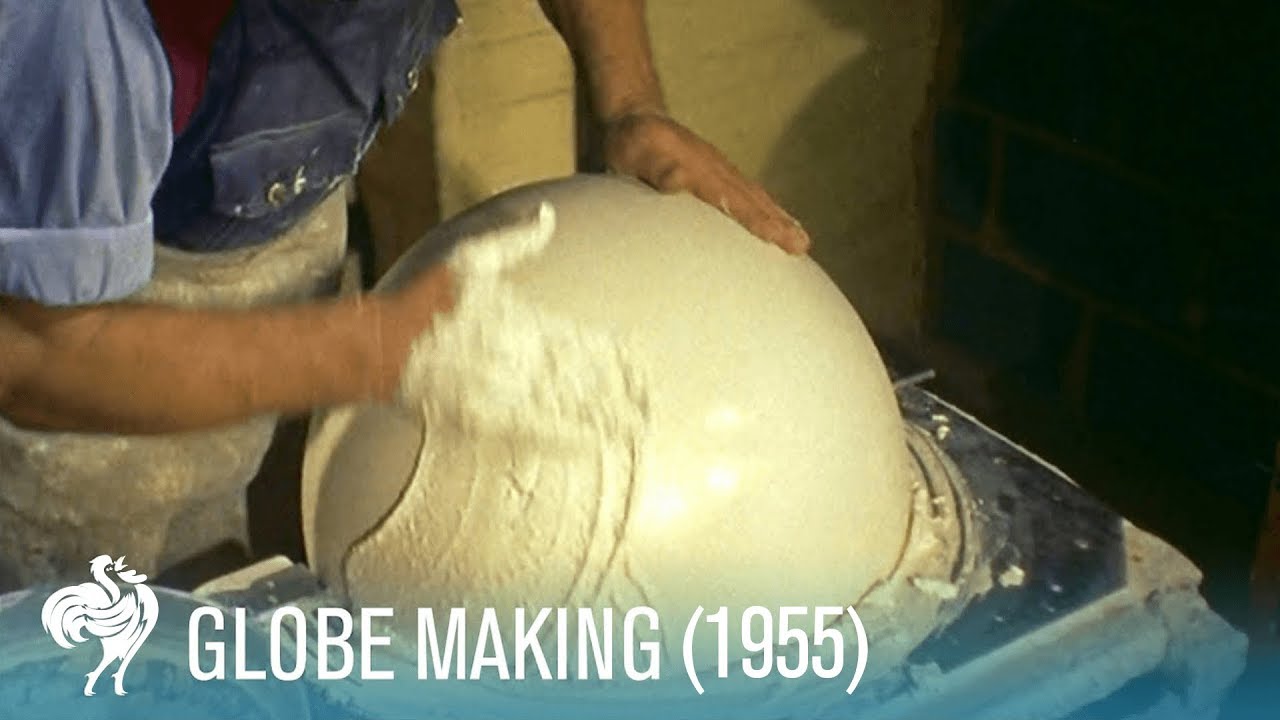 Next Video
Skilled craftsmen and craftswomen demonstrate how one goes about making a world globe starting with a wooden mould and finishing with a healthy coat of varnish.

C/U of a strange shelving system which holds several wooden circular spheres - these are moulds for globes. A woman takes one of the moulds from a shelf and takes it over to a workbench. She fixes it to a device which holds it steady whilst still allowing it to spin. Another girl is sticking red strips onto a larger sphere. The narrator tells us that this is a famous North London firm of geographers (but he doesn't tell us who). He recounts the history of globe making and the technique of building up layers of paper and plaster onto the solid ball of wood. C/Us of pieces of newspaper being stuck on to the wooden surface and of the second girl placing red strips onto her globe. Various shots of the girls at work. Complete globes are placed onto another rack ready to undergo the next process.

M/S and C/Us of plaster being applied to the globes. C/U of the craftsman who performs this specialised task. L/S of the "covering department". Three women work amongst lots of globes. Coloured printed sections showing the map of the world are cut to shape then pasted onto the surface of the globes - a skilled operation. Various shots of this process. Narrator observes that "a fraction of an inch 'out' will put the world miles out of joint." C/U and M/S of woman sticking the map onto a globe. C/U of the map being smoothed down and excess glue removed. Narrator describes the various types of globe available and their prices over C/Us and M/Ss of women performing their painstaking tasks. L/S of a male worker adding a protective coat of varnish. Narrator recounts the fact that lots of the workers have been there for over 30 years and quips: "While the rest of the mankind does its best to blow the world up, they like building a new one." Nice end shot of a globe being lit up.

BRITISH PATHÉ'S STORY
Before television, people came to movie theatres to watch the news. British Pathé was at the forefront of cinematic journalism, blending information with entertainment to popular effect. Over the course of a century, it documented everything from major armed conflicts and seismic political crises to the curious hobbies and eccentric lives of ordinary people. If it happened, British Pathé filmed it.

Now considered to be the finest newsreel archive in the world, British Pathé is a treasure trove of 85,000 films unrivalled in their historical and cultural significance.