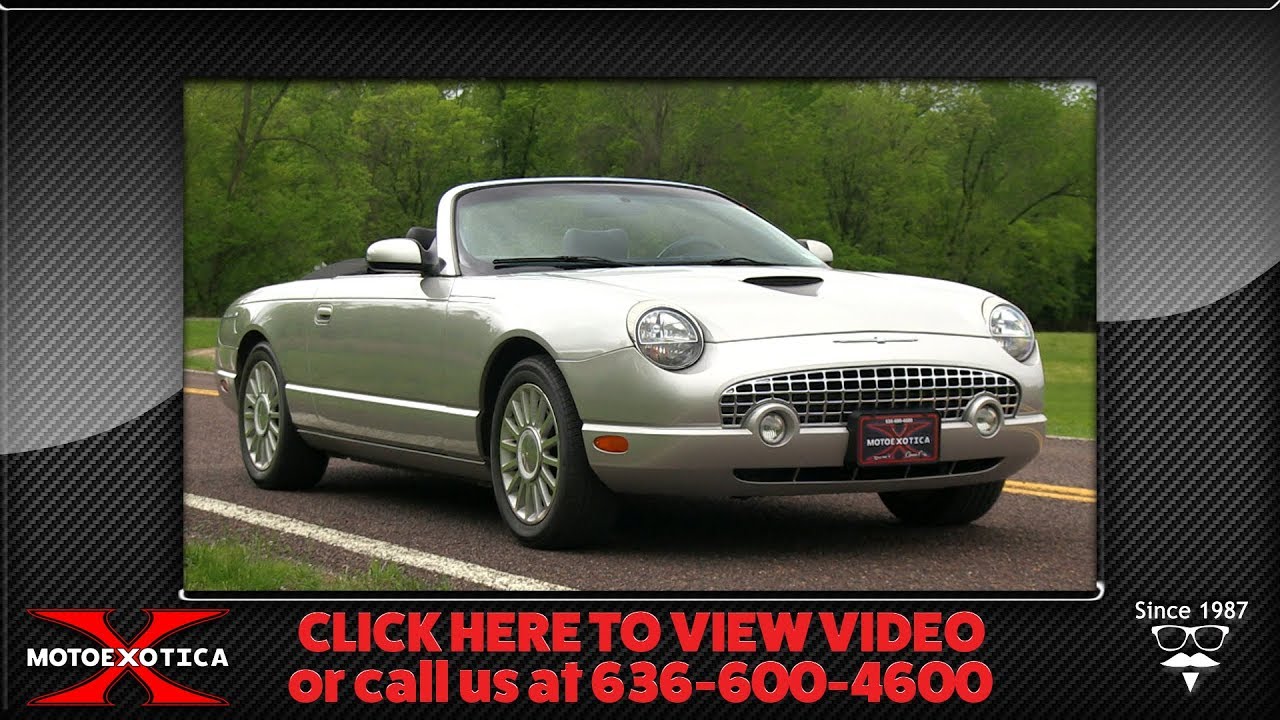 What you see pictured here is one of the final #Ford Thunderbirds made – a modern expression of the classic cruiser. Two-thousand and five marked the Thunderbird’s 50th Anniversary. Part of the nostalgic, retro styling movement of that era, this 11th-generation model ended the marque’s run and is one of 9,548 examples made in 2005.

Built at Ford’s Wixom, Michigan factory, this car is finished in Platinum Silver with black trim. The paint and trim are in overall very good order. The car’s bodywork is straight and solid, the engine bay is very tidy, the black, power retractable top looks very good and the body-colored bumpers are in great shape.

This Bird rolls on Michelin Pilot MXM4 radials, size 235/50R17. Each tire is mounted on a factory alloy wheel. The wheels are in good, original order while the tires are in very good condition.

Under the hood is Ford’s 3.9L DOHC 32-valve V-8 engine (code AJ35). It was a unique displacement variant used only by Ford and Lincoln and was built in Ford’s Lima, Ohio engine plant. The AJ35 version introduced in 2003 added variable valve timing (VVT) of the intake camshafts and electronic throttle control (ETC). While the block, crankshaft, pistons and connecting rods are all unique to this displacement, many other parts are shared with the AJ-V8 engines produced in the United Kingdom by Jaguar.

Inside, the black leather buckets with map pockets are in great condition, as is the matching carpet and four-spoke steering wheel with satellite radio controls. The instrument panel and inner door panels mirror the rest of the interior’s condition. The center console and shift look good. Completing the interior is a factory AM/FM stereo with a CD player. Safety equipment included dual front air bags and a center, high-mounted stop light (CHMSL).

It was based on the Ford DEW platform. Although it was initially well received by the automotive press, garnering accolades such as the Motor Trend Car of the Year and a nomination for the North American Car of the Year in its first year of existence, many publications regarded the Thunderbird’s revival rather more frostily after a few years; it garnered a place on Car and Driver magazine’s 2009 list of “The 10 Most Embarrassing Award Winners in Automotive History.”

When the 11th-generation #Thunderbird was released, it followed the then-recent trend for nostalgic recreations of old-fashioned (or “retro”) styling (e.g. Volkswagen’s Beetle, Chrysler’s PT Cruiser, Plymouth’s Prowler and the Mini Cooper), using design cues from the original Thunderbird. Available only as a convertible with a soft top and an optional removable hardtop, according to automotive writer Jerry Flint, the new Thunderbird “turned heads wherever it went.”

This modern cruiser coddles its occupants in comfort; the engine is ideal for all-day cruising and while packing light is recommended, this Thunderbird remains the perfect weekend getaway car. Please visit MotoeXotica Classic Cars today and see it for yourself.

This car is currently located at our facility in St. Louis, Missouri. Current mileage on the odometer shows 17,251 miles. It is sold as is, where is, on a clean and clear, mileage exempt title. GET OUT AND DRIVE!!!