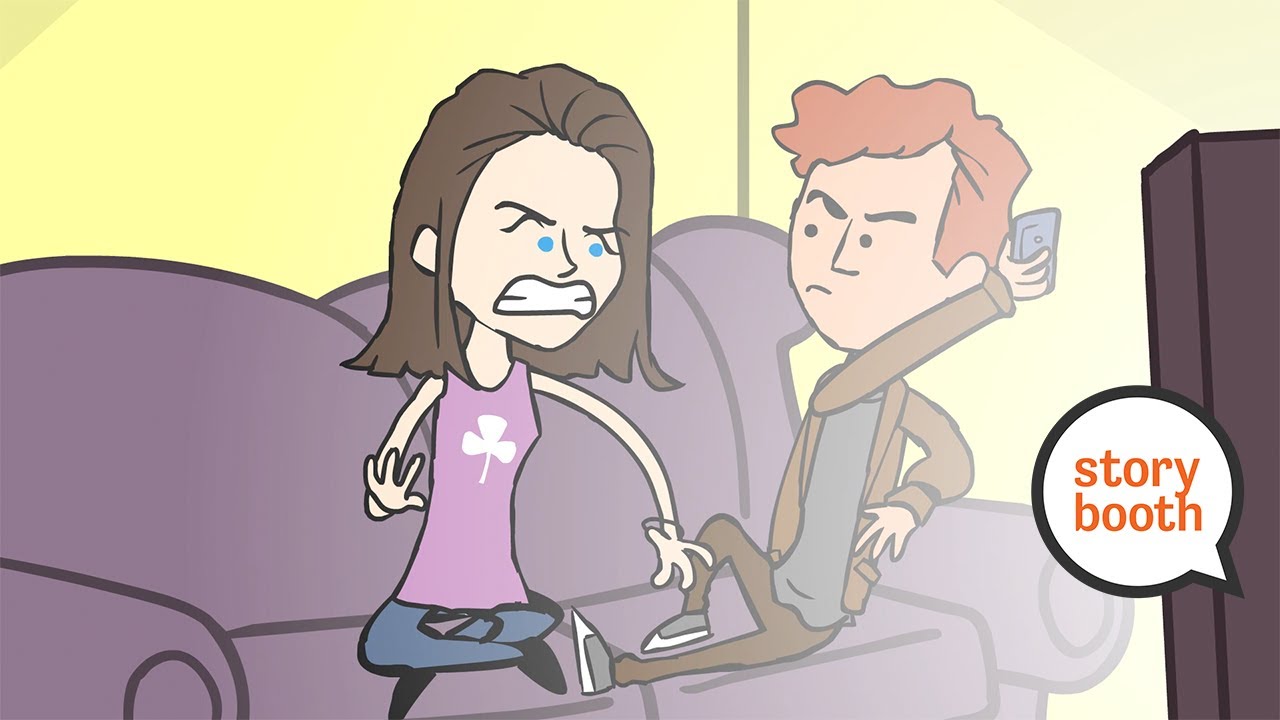 Next Video
By Gabby | Ready to "wear it out loud?” Merch store open, SHOP NOW: http://bit.ly/storybooth-merch | Subscribe: http://bit.ly/sub2storybooth | Record your story @ https://storybooth.com or our iPhone app for a chance to get animated. Comment, like, share this story.

9th grade - Freshman year in high school - is a time for a ton of firsts, independence, free-thinking, soon to be driving, and, sometimes, flirting, dating, and maybe, first love! This is a dating story that takes quite a journey.

Early in the year Gabby met a boy at a carnival, and, even though at first she didn't think of him in any romantic "boyfriend" way - she didn't even think he was all that cute at the time - they started hanging out, a lot. And, they became best friends.

Eventually, after really hitting it off they started to really like each other, and then, just like that, they were boyfriend and girlfriend. Gabby had never had a boyfriend, and for the first few months it was amazing - their honeymoon phase - and they were always together and she really felt like she was in love with him.

But, slowly, she started to see a different side of him, and she started to realized that he wouldn't let her do anything. He kept her from going out with her friends, wouldn't let her text someone that she knew and had been friends with for a really long time. He disrespected her, controlled her and degraded her. He was possessive. paranoid, and controlling. Yeah, this is a bad relationship story.

Then he started telling her nasty and mean things, making her feel like she was bad, and worthless, and not good enough. He said mean things to her to make her feel small every single day, he was condescending and hurtful and she dealt with it day after day and year after year. Her self esteem went down and it caused her to be depressed and really sad. He had a bad temper and did not want her doing anything away from him. He did not trust her or anyone else. She deserved more, she deserved better.

This was after all her first love, even if he was a bad boyfriend, a really, really bad boyfriend. And, even though she felt awful, she really didn't know what to expect, or what a normal love relationship was supposed to be like, she had never been in one.

That bad boyfriend caused Gabby a ton of pain, sent her into a depression and made her feel anxious all the time. Things just kept getting worse and worse, and she just kept staying with him, kept dating him. He was a real jerk.

To her it was evil, but nobody else could see what he was doing to her, he didn't hurt her physically, but emotionally he really did hurt her, and it did real damage, hurt just as much and lasted longer than if it was physical. he really hurt her; her mind, her self worth and self esteem.

Even now all the awful things he said to her are still in her head, but at least now she can ask herself "who was he anyway? why did he have such power of me? He was just an awful person, and the things he said to me weren't true."

Finally, thankfully, Gabby couldn't take it anymore, she built up her courage and stood up for herself and broke up with him! She broke up with her boyfriend - The Jerk!

And it took her a long time to get over that bad boyfriend, and all the things he did and said to her, but finally, she met an amazing, sweet, and wonderful guy who loves her for who she is and would never say things just to hurt her and make her small. Her new boyfriend is AMAZING! He treats her the way she deserves to be treated, with respect and love. It turns out that this is actually a fantastic dating story with a genuine happy ending. Will they live happily ever after? Who knows but what we do know is that Gabby is happy!


What's your story? storybooth wants to hear it!